Since the dawn of aviation, planes have primarily been powered by carbon-based fuels such as gasoline or kerosene but with oil resources declining and penalties on greenhouse gas emissions increasing, the future of aviation is dependent on finding an alternative power source. In recent years, several manufacturers have invested time and money in the research and development of airplanes able to fly with electric motors. Is electrification of aviation the answer for a greener aviation  ?

A first step towards ‘eco-friendly aircrafts’ has been the attempt to significantly reduce fuel consumption by improving energy efficiency. In practice, this has meant to reduce the weight of the aircraft, reducing drag with improved aerodynamics and optimising the flight profile to use less fuel; but , in order to have a significant reduction in  smog and pollution, such a goal requires major, longer-term solutions. One possible option is electrification of aircrafts. One of the key limiting factors toward its use in aviation has been  the Battery storage : typical lithium-ion batteries in use today have a maximum energy density of around 1,000,000 joules of energy per kilogram, not such a big outcome compared to the 43 milion joules per kilogram delivered by aviation fuel; moreover, swapping the fuel tanks for a battery weighing 43 times as much isn’t a viable option – clearly there’s a significant storage problem to be solved before electricity can power large and heavy aircraft over long distances.

Despite all the obvious difficulties, aviation manufacturers have developed new protypes which are intented to show possible solutions towards this relevant engineering challenges; By now all the efforts towards electric powered flights has been the development of small, unmanned air vehicles or light aircrafts : the european manufacturer Airbus is very close to the first flight of its CityAirbus electrically powered autonomous urban air taxi; a maiden flight had been scheduled for late 2018, but the manufacturer decided “to go a bit slower” because of the complexity of the program; currently, the CityAirbus propulsion system comprises four batteries, four electrical distribution boxes and eight direct-drive electrical motors which will be able to cope with the failure of up to two motors; Maximum take-off weight for the CityAirbus is 2.2t and it is designed to carry four passengers. 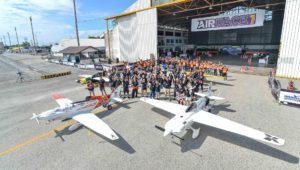 Moreover, in a move aimed at expanding engineering research on electric flights, the aerospace giants has also announced a partnership with Air Race E, the world’s first electric airplane race set to launch its inaugural series in 2020. Air Race E will follow a format similar to the formula one racing : eight electric-powered airplanes will race against each other on a tight 5-km circuit, flying just 10 meters above the ground and at speeds faster than any land-based motorsport.

Airbus is the official founding partner of Air Race E, a competition that “aims to drive the development and adoption of cleaner, faster and more technologically advanced electric engines that can be applied to urban air mobility vehicles and, eventually, on large commercial aircraft,” the organizers said. 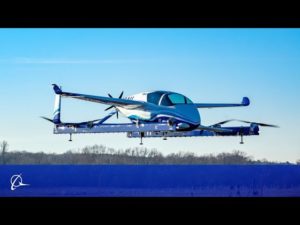 On the other side of the ocean, the US manufacturer Boeing has recently completed the first test flight of its autonomous passenger air vehicle (PAV) prototype in Manassas, Virginia. Boeing NeXt – this is the name given to this new aircraft – encases the company’s researches to design and develop the electric vertical takeoff and landing (eVTOL) systems applied on urban air mobility unmanned aircrafts. 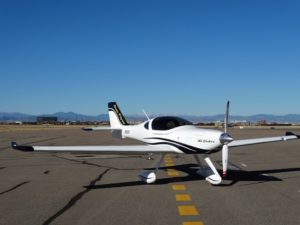 On the same situation as Boeing is the US manufacturer Bye Aerospace which has realized the Sun Flyer 2; The Sun Flyer family of aircraft, includes the 2-seat Sun Flyer 2 and the 4-seat Sun Flyer 4 and aims to be the first FAA-certified all-electric airplanes to serve the flight training and general aviation market. The two seat all electric aircraft is powered by by a Siemens 57 lb.-SP70D electric motor with a 90kW peak power rating (120 HP) and a continuous power setting of up to 70kW (94 HP).