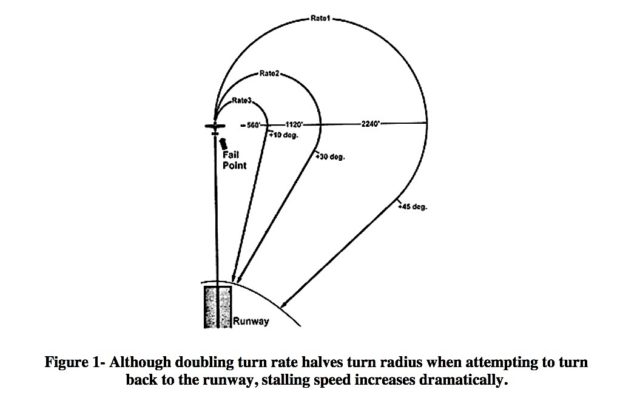 (by Max Trescott) – An email exchange I’ll share reminded me of this quote from Rod Machado: “The most important decisions you’ll ever make in an airplane should be made before you enter the airplane.” If you haven’t previously thought through and decided what you’ll do if the engine quits on takeoff, I encourage you to take a few minutes right now to think it through. After all, the life you save will be your own!

The instinct to turn back to the runway is powerful. If you rely upon just instinct, instead of…

deciding ahead of time what you’ll do when the engine quits, your instinctive, gut decision may be the last one you ever make. There’s no shortage of accidents that demonstrate that pilots often make poor decisions upon encountering situations they haven’t thought through ahead of time. Few things are more tragic than a pilot, surrounded by fields and a golf course, who loses an engine at 400 feet, turns back to the runway and crashes and burns at the threshold. I know—that exact scenario happened at the Livermore, Calif. Airportin 2007 and I saw the burn marks left by the small pile of rubble after the fire. You couldn’t have asked for a better place to have an engine fail, yet the pilot’s instincts suckered him into a classic error in judgment.

The Problem with Instincts
One problem with relying on instincts in this situation is that the decision making process required is the exact opposite of the learning conditioned into a pilot by hundreds or thousands of hours of flying experience. During most flights, 100% of our efforts are dedicated to returning the airplane to the airport without a scratch. Why? Because scratches are expensive and nobody wants to spend money they don’t have to. Also, if the airplane returns without a scratch, then we’ll surely arrive without one too.

But the situation is completely reversed when an engine quits shortly after takeoff. In that case, it might not be immediately obvious which decision to make: land straight ahead or turn back to the airport. But like the Sirens of Greek mythology, the powerful call of the runway is hard to resist; after all, the runway has always been a safe harbor before and IF you’re able to make it back, the runway holds out some possibility of returning the airplane without a scratch. But wait, Stop! When the engine quits, your priorities MUST reverse. Now, you must think solely of saving yourself, even if it means totally destroying the airplane in the process. That’s a tough decision to make IF you haven’t thought about it in advance.

Human psychology seems to be biased toward preventing loss. Thus, pilots often incorrectly make a decision to turn back toward the runway because it MIGHT prevent a loss of money, even though failing to execute the maneuver may KILL the pilot! Instead, your focus needs to be on what you will GAIN from a correct decision. In this case, a pilot should choose whatever decision will MAXIMIZE the chance of their survival and totally disregard any damage to the airplane that may occur. After all, when the engine quits, the airplane is owned by the insurance company and there’s no reason you should risk your life to save the insurance company some money.

The Impossible Turn
A long time ago, I read the FAA’s Impossible Turn safety brochure, which convinced me that the odds of making a successful return to the runway after a takeoff engine failure are stacked against pilots. I tell pilots not to even consider it unless they have gained about 1,000 feet of altitude and hopefully have departed from a long runway, since they’re unlikely to make it back to a short runway unless they took off into a strong headwind. Instead, they should land more or less straight ahead. Sure they might turn perhaps 30° to avoid obstacles or to reach a better smoother touchdown area. But they shouldn’t be lured back to the runway unless they have a lot of altitude. Even then, with little headwind or a short runway, making it back may not be possible.

What’s even sadder than having a pilot die while trying the impossible turn is having a CFI and a client die while practicing the impossible turn at low altitude. I’ve haven’t researched how often this happens, yet I’m aware of one fatal crashand one non-fatal crash that destroyed an airplane, both of which happened within the last couple of years here in California. In both cases, the aircraft took off from an airport, the power was pulled off to simulate an engine failure and the airplane was turned back to the runway. While I didn’t know the occupants of the fatal crash, I do know the CFI who survived the non-fatal crash.

Many things get passed down in aviation, but that doesn’t mean that they are good ideas. This instructor taught his clients to return to the field after an engine failure since that was how he was taught by his instructor. To his credit, he researched the issue after the accident and concluded that teaching the maneuver at low altitude was dangerous and made no sense. He now only simulates it when he’s thousands of feet above the runway. I’ve always liked him and now I respect him even more. Primacy is a powerful force and we tend to rely more heavily on things we’ve learned first. In this case, he’s revised his view based upon research, something we should all be willing to do as pilots.

So if you’ve been taught to practice the Impossible Turn by departing an airport, cutting the engine and turning back to the field, I strongly encourage you to research the issue and discontinue doing it. If you’re a CFI, please only do this by starting the maneuver a few thousand feet above an airport. Tomorrow in Part II, I’ll share with you the email exchange I had after I observed a CFI teaching the Impossible Turn to his low time student at my home airport.