(by Diamond Press Office)
Diamond Aircraft is happy to announce a technical supplier sponsorship with Pilot Pete McLeod of the Red Bull Air Race World Championship. The sponsorship kicks off February 8 at the championship’s inaugural event in Abu Dhabi, United Arab Emirates, where McLeod will begin his run for the title.

Pete McLeod: “I’m thrilled to have the support of Diamond Aircraft. Their commitment to innovative, efficient, modern aircraft design and construction is a perfect match for the challenge of competing in the Red Bull Air Race. With standardized engines, the technology game is no longer about horsepower. It is a race of aerodynamic design, efficiency, and optimization – no general aviation manufacturer does this better then Diamond Aircraft!” 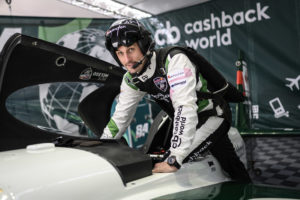 Amila Spiegel, Sales & Marketing Director Diamond Austria: “Getting involved in the Red Bull Air Race is another step forward for Diamond, as we continue to strongly enhance our marketing activities globally. Not only the Air Race itself, one of the most exhilarating motorsport series on the planet, but also Pete as a person is just a perfect match to the Diamond brand, sharing our passion and our dream of flying in everything he does.  It is absolutely fantastic having him in our Diamond Aircraft Family and we are more than excited to support him this season.”

Scott McFadzean, CEO Diamond Aircraft Canada: “Diamond Aircraft is thrilled to be partnering with Pete McLeod and Red Bull Air Race this season. We are very proud to have a partnership with Pete McLeod and look forward to a mutually beneficial relationship this season. Diamond’s constant strive for innovation and excellence in everything we do is a value shared by Pete and we look forward to leveraging our composite design expertise to help redesign parts of his aircraft to make him even faster this season. That coupled with the fact that Pete shares the same home field in London, Ontario (CYXU) as the Diamond Aircraft Canada factory, there could not be a better match.”

Pete McLeod of Red Lake, Ontario grew up flying small float planes and playing hockey. He obtained his pilot’s license at age 16, before his driver’s license, and started aerobatics that same year, flying competition aerobatics and air show freestyle as the youngest Canadian air show performer. After earning his aerobatics instructor rating at age 18, followed by an economics degree at the University of Western Ontario, he flew air shows and competitions full time – dedicated to qualify for the Red Bull Air Race.

Pete McLeod emerged as one of the top Red Bull Air Race pilots in only his third year of competition, 2014, with three podiums including a career-first victory in Las Vegas. The self-proclaimed ‘kid from small-town Canada’ had already rewritten history in 2009, when he became the World Championship series’ youngest pilot at age 25 and the only Canadian ever to compete in elite sport.

Diamond Aircraft, headquartered in Austria, is amongst the leading companies in General Aviation. Developing and building a family of aircraft takes long-term vision and unwavering commitment – it’s not for the faint of heart. Founded in 1981, Diamond has pioneered many aviation firsts and achieved numerous milestones and industry expert accolades. Today, Diamond Aircraft offers the most complete range of certified piston aircraft models; from the 2 seat single DA20 to the stunning new 7 seat DA62.  Every one of its aircraft shares a common DNA, incorporating leading edge technology, not for the sake of innovation, but for superior performance, efficiency and safety. Diamond Aircraft is building a sustainable future for general aviation globally, not simply to achieve our own ambitions but those of future pilots.