(by Chad Berndt -Teslarati.com)  Electric flight may not be as far away as we once thought. In the next decade, aircraft are set to see dramatic changes as companies both large and small work to bring fully electric and hybrid flight to market. Airlines, manufacturers, and startups all seem to be moving towards this goal (see below). The race is clearly on and it will change the way we think about flight.
Yet as it was for the introduction of electric vehicles, the first aircraft is short range and seat just a few passengers. 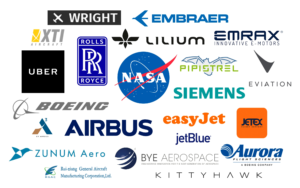 Their applications today are limited but to think the industry will stay in this nascent stage would be a mistake. Successes in these small and short-range aircraft will translate forward into larger and longer-range aircraft. The companies that find success here will emerge as leaders in a new era of electric flight.

ON THE MARKET TODAY:

First, it’s important to appreciate that only recently have small electric powered aircraft gone from concepts to commercial use.
Pipistrel’s Alpha Electro is one of these all-electric aircraft. It’s meant primarily for pilot training and just received its airworthiness certification from the FAA in April 2018, becoming the first in the USA to do so. The Alpha Electro only seats two people and is good for an hour of flight plus reserves. That might not sound like much but it could be disruptive. Pipistrel says the aircraft cuts beginner pilot training costs by as much as 70% while producing zero emissions and low noise.
In China, the Ruixiang RX1E is a similar style trainer sold there commercially. They also have a new, longer-range model that was recently tested, the RX1E-A. With a two-hour flight time the new version doubles its previous capabilities. At this size of aircraft the technology is getting close to parity with comparable gasoline-powered aircraft, like the Cessna 162 which has a flight time of about three hours.

Full parity might be here sooner than you think. Coming small electric aircraft have better specs and more seating, with many nearly ready for certification (pictured below). Pipistrel has their Panthera (top right), which will hold four passengers and will come in options for combustion, hybrid, and all-electric powertrains. There’s also BYE Aerospace in Colorado, which has a four-seater in development and just completed the first test flight of the two-seater Sun Flyer 2 — it has a flight time of 3 hours. Ruixiang also announced they have a 4-seater aircraft in development. The other important consideration is that their initial costs appear to be comparable to combustion options as well.

Tecnam announced the introduction of the new P2012 STOL

Tecnam announced the introduction of the new P2012 STOL